You are here: Home / Community / Love Monopoly? How about Huntsville-Opoly?

This post is more than one year old and may no longer be relevant. Please view this content with its age in mind.

If you love Monopoly, you’ll now be able to play your favourite board game with some familiar local landmarks.

Canadian toy manufacturer Outset Media has partnered with Walmart Canada to launch Huntsville-Opoly. The limited-edition board game will be available exclusively in the Huntsville store and online at Walmart.ca, starting this week and through the summer.

“Huntsville-Opoly takes a unique spin on the original version of Monopoly, where the places are pillars of the Huntsville community,” said Outset Media in a media release.

The game includes familiar streets and locales like Avery Beach and River Mill Park, Brunel Road and Hanes Road, Lions Lookout, the Algonquin Theatre and Muskoka Heritage Place, Huntsville High School, Algonquin Outfitters, Moose Delaney’s, Westside Fish and Chips, Deerhurst Resort, and Huntsville Festival of the Arts. Some of Huntsville’s biggest lakes are there, too. And in the traditional Boardwalk position: Downtown Huntsville. There’s even a traffic jam reminiscent of summer congestion on Main Street.

Outset Media began producing the -Opoly series for Canadian communities last year, under a license from Parker Brothers, the company that makes Monopoly. It found that its best sellers were in smaller communities; there are now close to 100 games celebrating the uniqueness of each of them.

Between the company’s 60 or so employees across the country, they generally have a good understanding of the community being featured, with research filling in the remaining details. In the case of Huntsville, it was all Jean Paul Teskey’s doing. He’s Outset Media’s senior vice president and has been cottaging in Huntsville since he was three years old.

“I said to the Walmart buyer, we should really do Huntsville-Opoly because I really think people will enjoy it, anyone who has grown up or visited or has a cottage [here],” said Teskey.

He included well-known landmarks and businesses that have been mainstays in the community for many years. “It’s places that people will really know and like… We don’t ask any of these businesses or anything that we feature for anything,” he added. “This is just done for fun and meant to celebrate the community.” 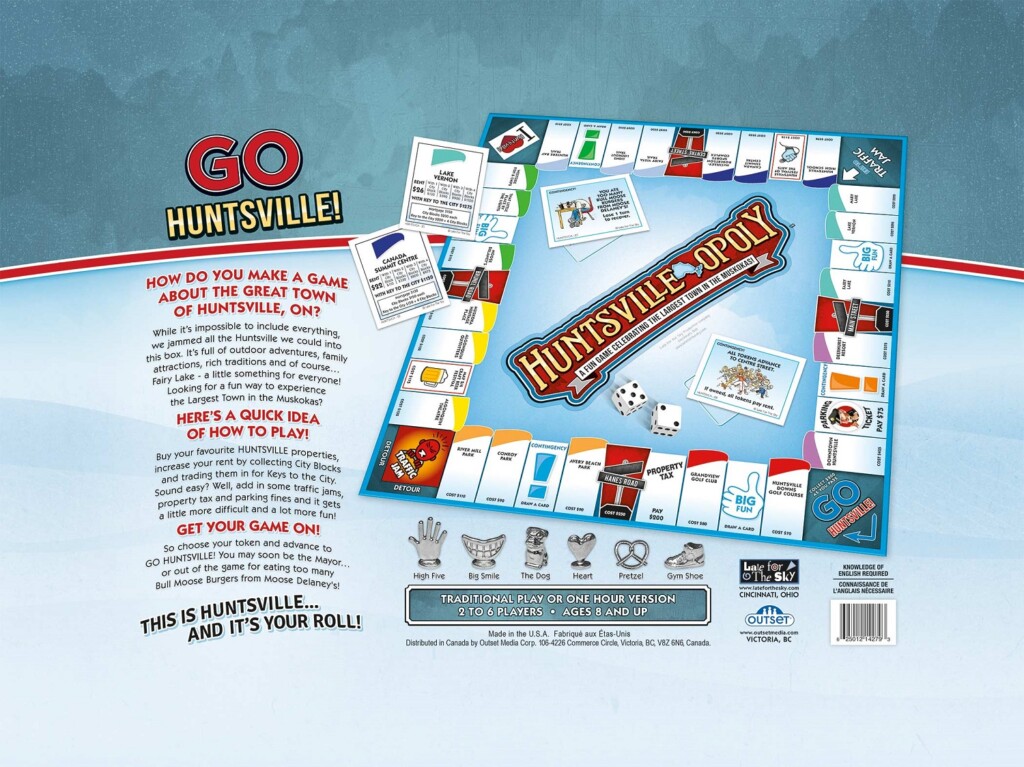 Just 720 copies of Huntsville-Opoly will be produced at a facility in Ohio—”there’s nowhere in Canada anymore that you can make a game like this,” said Teskey—and, despite the expense of production for such a small run, will retail at under $30. “It’s not a money-making venture, it’s just meant to celebrate communities and towns across Canada in a fun way that people know. Monopoly is the best-selling game of all time.”

Don’t miss out on Doppler!

Sign up here to receive our email digest with links to our most recent stories.
Local news in your inbox three times per week!

Established in 2015 by a bunch of local news hounds, Doppler strives to be the go-to source for people wanting to know more about what is going on in Huntsville and the surrounding community.

We strive to provide local news that is relevant and timely. We also look to tell local stories that inspire, inform and engage.

Notice the persistent use of the word local? Our mantra is local. From features on local people doing extraordinary things, to local business spotlights, news and sports coverage, all supplemented by provocative opinion pieces on topics near and far, we are working hard for you.

Feel free to drop us a line at huntsville@doppleronline.ca and tell us how we are doing, what you would like to see more of, or to just say ‘Hi’.

Thank you for reading Doppler.